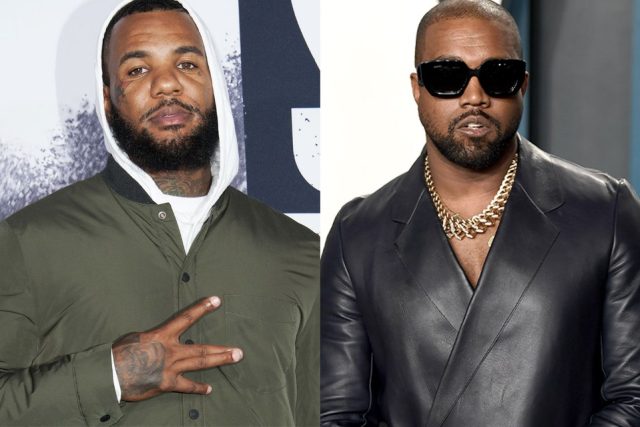 Kanye West won’t be performing at the Grammys next month.

According to The Game, Ye was scheduled to take the stage at the 64th annual ceremony, but he has been “pulled” from the lineup at the last minute.

In a lengthy post, Ye’s “Eazy” collaborator blasted the Recording Academy for their decision. He claims that the removal may have to do with Ye’s recent comments about Grammys host Trevor Noah or his 24-hour suspension from Instagram.

“The Grammys have at the last minute decided to pull @kanyewest from performing on the show as if we didn’t know it was coming,” Game told his 12 million followers. “Could be because @trevornoah is hosting and there was a conversation held amongst his team & the academy that led to the decision or because Ye’s account was suspended just days ago for reasons unknown especially in a world where all the negativities of the world can be found on the same app with no repercussions or suspensions.”

The Compton rapper claims it’s all part of a larger attempt to “steal the culture” and “not allow you to ever be their equals.” He also says that free speech is under attack.

“We’ll just say it’s all of the above & a continuous disrespect for us & all that we have brought to the table in entertainment, media & sports over the last 100 years especially,” he added. “Speak your mind in this country for yourself, family or your people & you’re ostracized immediately & if you push them hard enough they will stop at no ends to try and put an end to you as a whole.”

During his social media outbursts, Ye took aim at Trevor Noah after the “Daily Show” host spoke out about his “harassment” of Kim Kardashian. Ye changed the lyrics to “Kumbaya” to include a racial slur, which led to Instagram placing a 24-hour ban on his account for violating the platform’s policies on hate speech, bullying, and harassment.

After Ye’s attack, Noah shared his concern for his well-being. “You’re an indelible part of my life Ye. Which is why it breaks my heart to see you like this,” he wrote. “I don’t care if you support Trump and I don’t care if you roast Pete. I do however care when I see you on a path that’s dangerously close to peril and pain.”

In his post, Game touted his own willingness to speak out despite the consequences. “I for one, have never been scared to speak my mind even understanding what the consequences may be,” he said. “I can’t sleep at night knowing I was quiet about issues burning holes in my heart or narratives incorrectly pushed by the mass agenda to create a mind set that the person at hand is krazy or has issues internally that are beyond repair.”

While defending Ye, he also brought up Colin Kaepernick. “I say all this to say, I’M WOKE….. & while I am.. lemme remind you that Colin Kapernick still isn’t allowed in the NFL, lynching just became a federal hate crime in 2022 & you can now not be discriminated from employment because of the way you decide to wear your hair…”

Added Game, “GEEZ thank you massa for allowing us to slowly progress as a race 100 years at a time after all that was STOLEN from us. I’m sure I’ll be the next account suspended for speaking freely on an app created for us to equally share as humans lol.”

Despite Game’s claim, the Grammys never officially announced Ye as a performer. After being delayed from January, the show is slated to take place April 3 in Las Vegas with performances from Lil Nas X, Jack Harlow, Billie Eilish, BTS, and more.