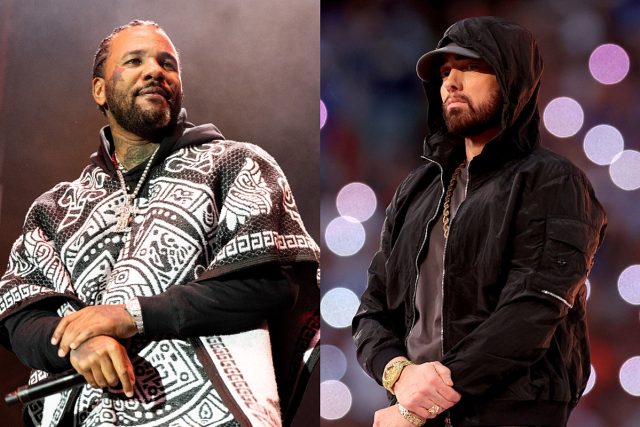 On The Game‘s recent episode of Drink Champs, he let multiple hot takes fly in the four hour interview. One of the most explosive opinions was that he was a better rapper than Eminem, and would beat him in a Verzuz Battle.

When speaking about Em, he said he respects him, but he’s simply better: “Eminem, Eminem is Eminem. I like Eminem, he’s one of the f*cking good emcees, great emcees. I used to think Eminem was better than me. He not. He not. He’s not. Ay, challenge it. It’s not drama!… Swizz [Beatz] and Timbaland know that it’s bigger than Verzuz. I’m not saying I want smoke with Eminem, I’m saying I want smoke with Eminem, him, and him, whoever.”

Then, when promoting the episode today (March 6), The Game stuck by his opinion, and saidd the only way to settle it would to be in the booth: “Nah. Is Eminem better than me? Nah he’s not, bro. I think the best way to see if he is or if I am is, sh*t n***a, let’s rap about it. Let’s get up, let’s get in the studio, let’s rap about it. Let’s do something, let’s put something out, let’s see, cause that’s what this sh*t is. Let’s rap.”

The Game continued by saying he hardly ever taps into his full potential, but when he does, he’s nearly untouchable as a rapper: “For me, I never really gave n****s the just of who I am lyrically. I just be doing this sh*t because I’m skilled enough to do it. As far as some real lyricism, some real hip-hop, real get in the studio and take the gloves off and really get it in, y’all n****s be having me f**ked up. I ain’t even gonna lie. Y’all be having me all the way f**ked up. Who? What rapper is better than me? Even if a rapper was better than me, why the f**k would I ever say another man is better than me in anything in life? I’m always striving to be the best human I can possibly be. The best rapper, the best father, the best friend.”

In the caption of the post on Instagram, The Game claimed it was his year, as he expects to have a new album coming out soon: “It’s MY YEAR !!!! @drinkchamps interview is out now & the #3 trending on YOUTUBE. Go check it out… & while you out, go tell ya favorite rapper I’m BETTER !!!”

Do you agree with The Game?