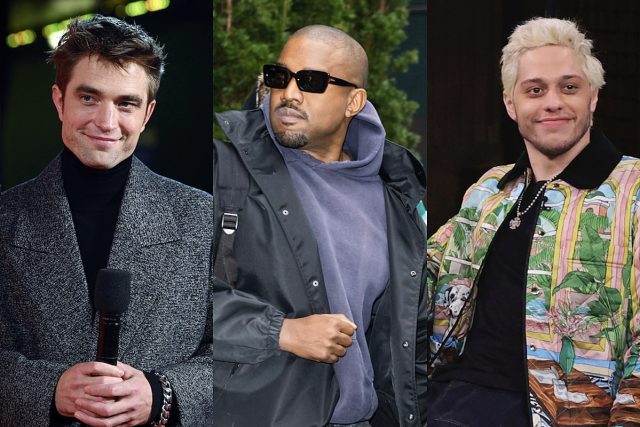 If you’re a fan of 35-year-old Robert Pattinson, you may already know that he has a reputation for being something of a troll, and reports of his latest rumoured antics from Page Six do nothing but validate those claims.

The English actor has been enjoying a moment in the spotlight following the premiere of his long-awaited rendition of The Batman, in which he stars alongside Zoe Kravitz in Gotham City. Earlier this month, Pattinson hosted a secretive “after-after party” at Pete Davidson’s Pebble Bar at Rockefeller Center in NYC to celebrate the big event, but rumour has it he couldn’t resist playing Kanye West songs all night long.

“I heard a lot of Kanye,” a source told Page Six. “Not many people know about this party, but most of the music being played was Kanye.” Among the tracks blasting were 2016’s “Fade” and his Grammy Award-winning 2006 hit, “Gold Digger,” although it remains unclear if “Eazy” – Ye’s diss track aimed at Davidson – had any air time throughout the night.

Some were under the impression that the Saturday Night Live star would be hosting the event, but apparently, he was stuck on set filming a movie and couldn’t make it to the star-studded affair, which saw appearances from Zoe Kravitz and her boyfriend Channing Tatum, Chris Rock, Dave Chappelle, and Busta Rhymes.

As XXL Mag points out, Gossip Girl reboot actor Evan Mock was also in attendance, and he was able to confirm that Pattinson’s party was, in fact, heavily soundtracked by West’s discography.

When Theophilus London posted a story with the initial gossip asking for confirmation before crowning Pattinson “king,”  the skater was able to come through, DMing him, “it’s true. I was there lol.”

It’s been noted that Davidson and Pattinson have been good friends for years, and The King of Staten Island actor was “honoured” to host the celeb-filled party at his newly-opened spot.

While it doesn’t exactly confirm anything, our new Batman’s behaviour seems to pair well with sources’ claims that Davidson found Ye’s diss to be more “hysterical” than threatening.