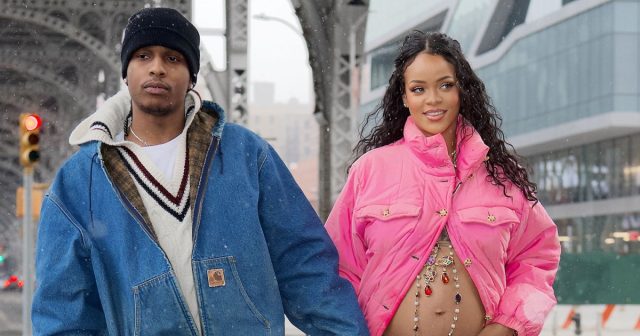 Rihanna and A$AP Rocky’s baby shower was anything but ordinary.

The superstar couple hosted a celebration for their first child just two days after Rocky was arrested while arriving at LAX. According to HipHollywood, the rave-themed bash was held on Friday night at a studio in Hollywood.

Guests were asked to wear bright neon-colored outfits to the “over-the-top soiree,” but were not allowed to film or photograph. It was a family affair as some of Rihanna’s loved ones flew in from Barbados for the intimate event.

Partygoers went home with gifts including T-shirts with photos of the couple as kids that read, “I Went 2 Rih & Rocky’s Rave Shower and All I Got Was This Amazing Shirt.”

The baby shower was reportedly postponed following Rocky’s arrest on April 20 in connection to a 2021 shooting. He and Rihanna had arrived from Barbados when he was handcuffed at a private terminal at the airport.

Rocky was charged with assault with a deadly weapon and released after posting $550,000 bail. The alleged victim claimed Rocky fired multiple shots during an argument in Hollywood on Nov. 6, 2021. He sought medical treatment for a minor injury after one of the bullets grazed his left hand. Cops searched Rocky’s L.A. house and reportedly recovered multiple guns.

In an interview with Vogue, Rihanna shared her vision for her unconventional baby shower. “No brunch, no blush tones. And no animal-shaped nothing,” she said. “Personally, I want a party. I want everyone to be plastered and crawling out. And it’s got to be co-ed! Don’t put me on no wicker chair somewhere with gifts at my feet where everyone is staring at me.”