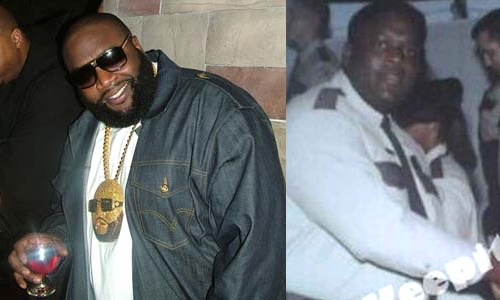 It was over a decade ago that Rick Ross was swept up in controversy over his past employment as a corrections officer. The MMG mogul has been a voice for the streets since his launch into the Rap game, but the C.O. news initially threw a curveball and caused Rozay to become the target of trolls and critics. It’s a job that continues to be a topic of conversation in some Hip Hop fan circles and although he first denied having the job all those years ago, these days, Ross has fully accepted all portions of his past.

During his recent appearance on the Full Send Podcast, Ross was asked about being a C.O. He revealed that he was about 20 years old at the time and the hosts wanted to know what the prisoners were like.

“I didn’t really get to make it to the prison ’cause you gotta go through training and all that and I didn’t last long,” said the rapper. “I may have last four months before they said I was a little tardy.” In 2008, Rolling Stone reported that Ross held the position for 18 months and since that time, it has been believed by the masses that Rozay held down the job for a lengthy period of time.

Ross also told Full Send that it was one of his “big homies” that put him onto the C.O. gig after getting into some trouble. It wasn’t a job that Ross enjoyed. “Anything you gotta do when you’re f*ckin’ runnin’ and joggin’, all of that sh*t, man. I missed a few days.” He also said the pay was “horrendous” and he only earned somewhere are “five-hundred bucks every two weeks.”

Back in 2014, Ross spoke with Sway Calloway about his C.O. past and said to feed his family, he’d do it all over again.

“I wouldn’t change nothing, cause to me it’s about who Rozay is,” he explained all those years ago. “It’s about me. Anywhere I go, when I step in the room, I put it down. People know it’s authentic right here, they know it’s real, so it was nothing that I was personally threatened with, I was just ready to move on. Let’s go get this money, let’s make this music.”