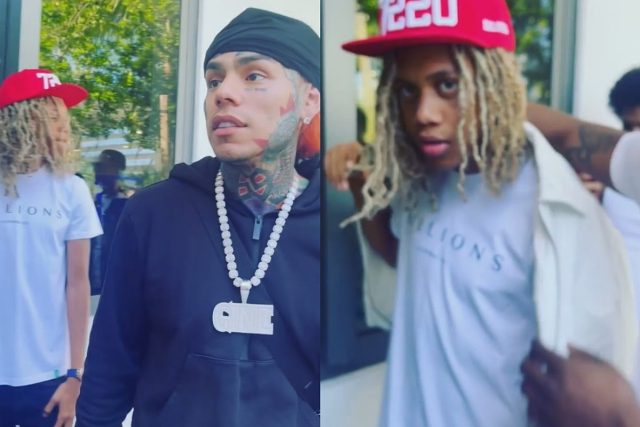 Perkio has entered the chat. Earlier this evening, an interesting video clip surfaced on the Instagram feed of one Tekashi 6ix9ine, who, in the spirit of giving, appeared to link up with rapper Lil Durk’s lookalike to gift him a special present, although it wasn’t so well received.

Many viewers have agreed that the young man looks uncomfortable in the clip as 6ix9ine approaches him to put a jacket on his back, emblazoned with a large image of the late What It Means To Be King artist, King Von. “@lildurk I had a gift for the bro,” the older star wrote in the caption. “@kingvonfrmdao your n*ggas ain’t never gon slide but they definitely rep you all day on t-shirts.”

Seeing as the “GINÉ” artist has a reputation for stirring up trouble, many weren’t surprised to see him caught up in the situation, although others voiced their disappointment at finding out that Durk’s doppelganger hanging out with the New York native.

Thankfully, Perkio has taken some time to clear his name, explaining on Instagram Live that he was “ambushed” by 6ix9ine and his boys. “His crew, he had a lot of n*ggas around him too, and they all came, and there was that jacket,” he recalled.

“Everybody ambushed me. He throw the jacket on me, like this n*gga was pressing his arms right here,” the young man continued, pointing to his shoulder. “He was pressing, and then I’m like, ‘Yo,’ like I was looking at him.”

Reactions in the comments show plenty of people looking out for Perk, urging him to get out of the situation. “Protect this baby, he don’t even know what he’s getting himself into,” one user said.

“Invading his privacy smh,” and “It looked that way too,” others added. Check out Perkio’s full video statement above.