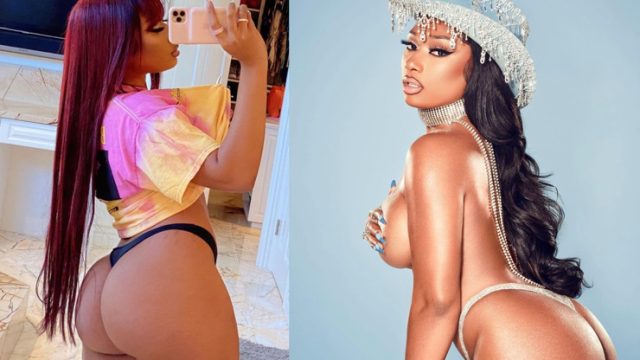 After sparking breakup rumors earlier this year, the couple is addressing their relationship status. On Thursday, Meg showed love to her boyfriend by sharing a video montage of herself, soundtracked by Pardi’s single “Hoop Earrings.”

The clip features footage of Meg twerking, along with highlights from her life and career, including her performance on “SNL,” winning Grammys, and receiving her college diploma.

Megan tagged her boyfriend in the caption alongside a blue heart emoji.

In the comments, Pardison gushed over his other half. “God was really on one .. when he made this one,” he told Meg.

Just after the new year, there were reports that they had split after the “Savage” rapper cleared out all photos of the couple from Instagram. Fans also noticed that Megan didn’t publicly wish her boyfriend for his birthday.

Amid their reported breakup, there was speculation as to what caused them to end their relationship. One media outlet claimed it was because Megan was abusive, suggesting she was a “mean drunk” who put her hands on her boyfriend. But Pardi shut down the domestic abuse allegations.

“Stop this cap nobody puttin hands on nobody …(at least not in that way),” he wrote. “Been seein the break up rumors and was lettin y’all imaginations run ..but y’all gettin too crazy ….ain’t give ni**as a story so they made one … we really been on it double time.”

Back in February 2020, Meg confirmed that they were dating. There were even talks of marriage. “I do want to marry him… He want to marry me,” Megan said during a YouTube Q&A last June.