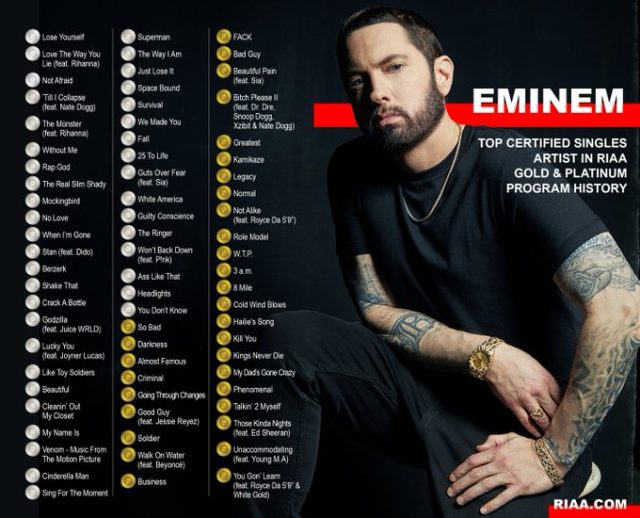 Eminem has officially become the most-certified Gold & Platinum singles artist in music history by earning 73.5 million new certified sales with the RIAA, also being certified Diamond with Curtain Call. This makes Eminem one of the most decorated artists ever with 166 million career single awards.

The news was revealed on Tuesday (March 8) after the RIAA awarded Eminem with a bunch of new Gold & Platinum certifications, as well as a Diamond certification for Curtain Call: The Hits. With that album being certified Diamond, that means that Eminem has a grand total of six Diamond plaques. The rapper got new certifications on the songs “Lose Yourself,” “Love The Way You Lie,” “Rap God,” “Not Afraid,” “Stan,” and others.

“These awards recognize Eminem’s unflinching commitment to his craft and the enduring connection he has forged with fans over the last twenty years,” said RIAA Chairman and CEO Mitch Glazier in a statement. “With today’s announcement, Eminem becomes the top certified singles artist in our program’s history and adds a rare third Diamond Album to his many creative accomplishments.”

“Interscope joins Aftermath in congratulating Marshall, Paul, and the entire Shady team on this remarkable achievement. It has been an honor to be part of one of the greatest journeys in the history of recorded music,” said Steve Berman, Vice Chairman of Interscope Geffen A&M. “The most beautiful part of this is it feels like the journey has just begun.”

As of the time of this publication, Eminem has not reacted to this historic feat. We will keep you updated on his reaction to the news as it arrives.

Congratulations to Eminem on this amazing accomplishment. Let us know what you think about Eminem becoming the most certified singles artist in RIAA history in the comments.