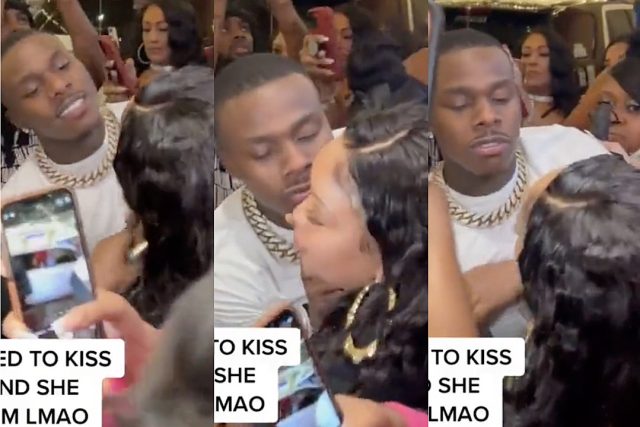 Earlier today, a hilarious clip of an interaction between DaBaby and some of his fans went viral. In the clip, the group of women are stumbling to meet the rapper and take pictures. After hugging some of the women, the “BOP” rapper locks eyes with one of the women at the front of the group, and tries to kiss her, to which she denies. DaBaby began getting clowned on Twitter and Instagram earlier after the clip was shared around, as the woman did not look pleased with the rapper’s attempts.

After everyone got their jokes off, DaBaby addressed the interaction via Instagram stories a few hours ago.

“Y’all go on head man (laughing emoji) he wrote. “Me and my booboos love each other to death but ain’t no kissin goin’ on (crossing arms emoji).”

Despite the rapper’s claims, it’s evident in the video that he was leaning in for something, and it definitely seemed like he was going in for the kiss. Many Twitter users questioned why the rapper even tried it with the fan in the first place.

She said “fuck no” 🤣 DaBaby going out sad. pic.twitter.com/Tm7uLDEzSn