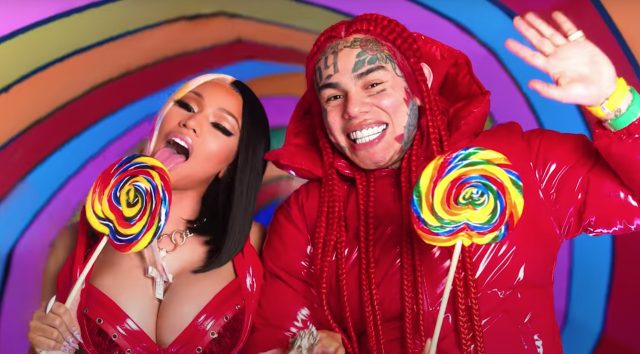 Tekashi 6ix9ine called out Nicki Minaj on social media, on Tuesday, for threatening to delay her upcoming album if her fans don’t support her newest music video “We Go Up” with Fivio Foreign. 6ix9ine says that the threat, which appears to have been a joke, was “crazy.”

“I love Nicki.. but threatening the barbz and fans is crazy,” Tekashi commented under a post from DJ Akademiks. “You can’t make someone king that don’t got it.. anyway if it’s that important to you got it. That threat was crazy.”

While Minaj didn’t explicitly say what she wanted it fans to do, it seemed clear that she was giving them a call to action to stream the new song.

“If y’all don’t do what needs to be done with the #WeGoUpVideo I will significantly and I DO mean significantly…delay the…the…the…oh what’s the word… oh! the album,” she wrote on Twitter. “That’s right. *sighs* the album *devil wears Prada Meryl Streep voice*.”

Details are sparse regarding Minaj’s upcoming album, but she’s previously said that fans will be able to hear the project before the summer.

Check out 6ix9ine and Minaj’s comments below.

Nicki was literally joking with fans there here go 6ix9ine inserting himself in it and then all the blogs posting it acting like she’s serious.. pic.twitter.com/EgUCTm2Q7Z